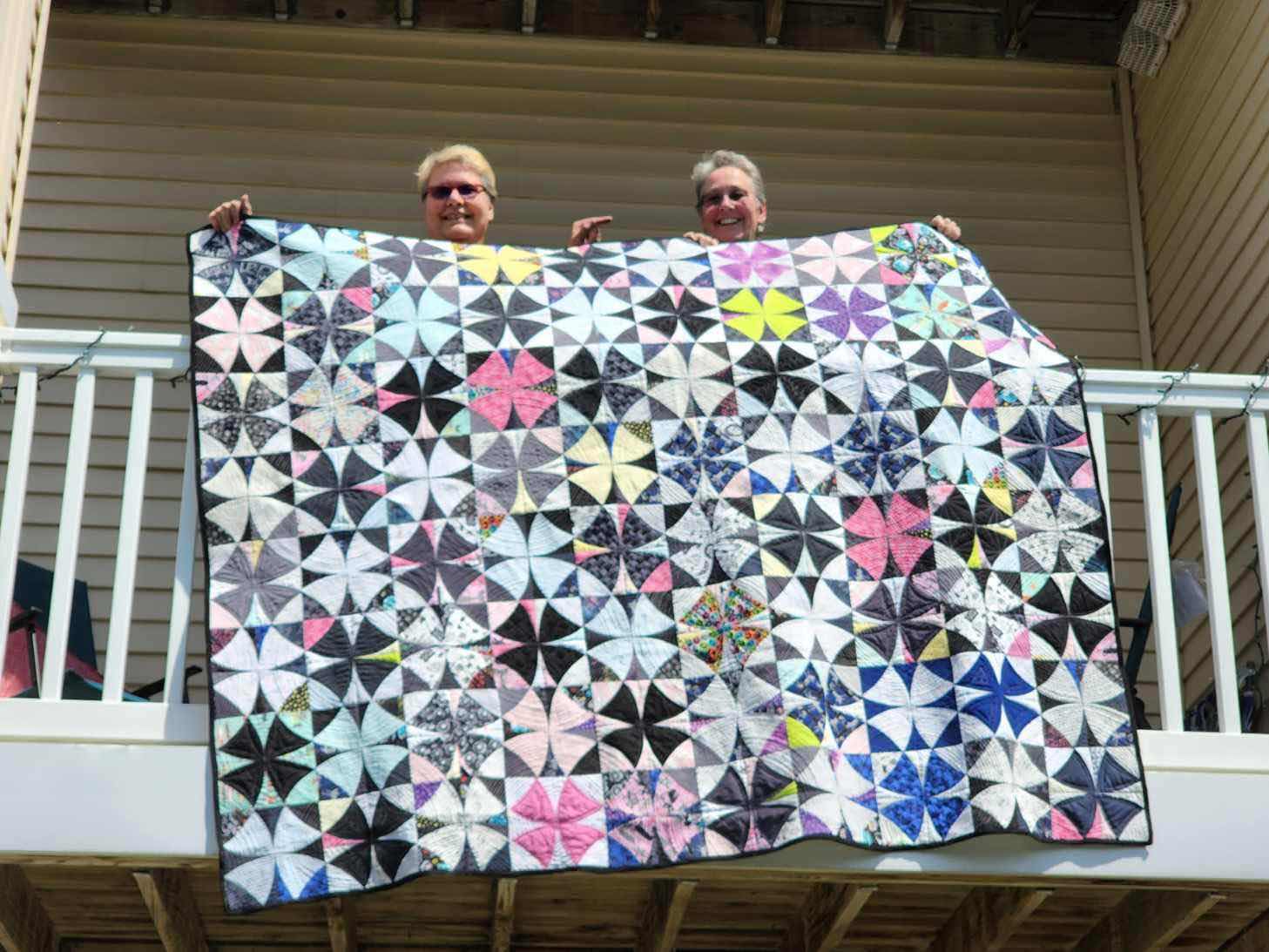 This quilt is finally complete, bound, and received by the intended. My best friend from my military brat childhood circa 1973 came for a visit to Delaware from Colorado Springs, Colorado. Come to think of it, we never made it over the line to Delaware, we stayed in Salisbury Md at my daughter’s apartment which had better guest facilities and was convenient to our day trips. We visited DC, Frank Lloyd Wright’s Falling Waters house near Pittsburgh PA, and Chincoteague VA. Was tempted but failed to squeeze in a jaunt to NYC too, but maybe next time. It was a great visit. 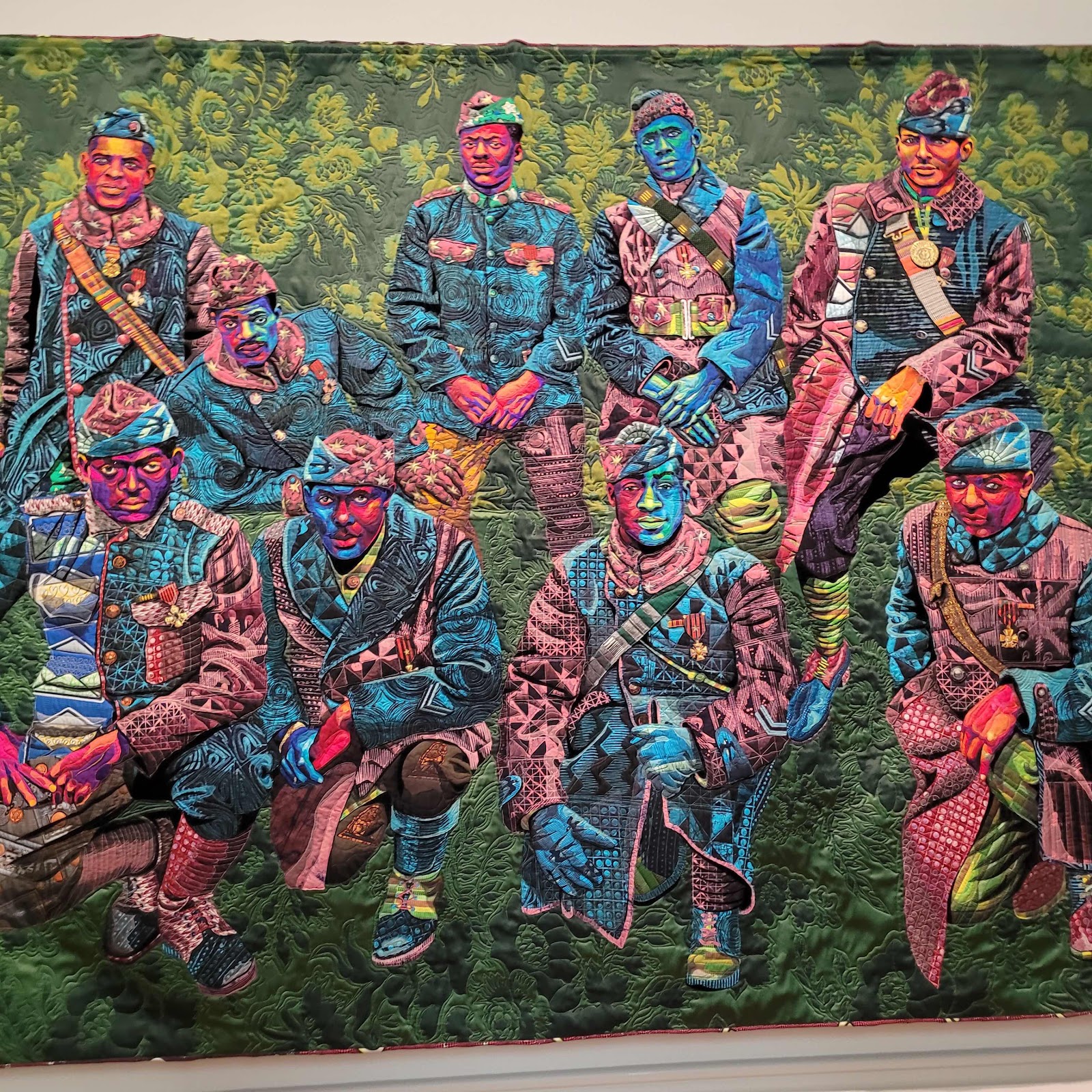 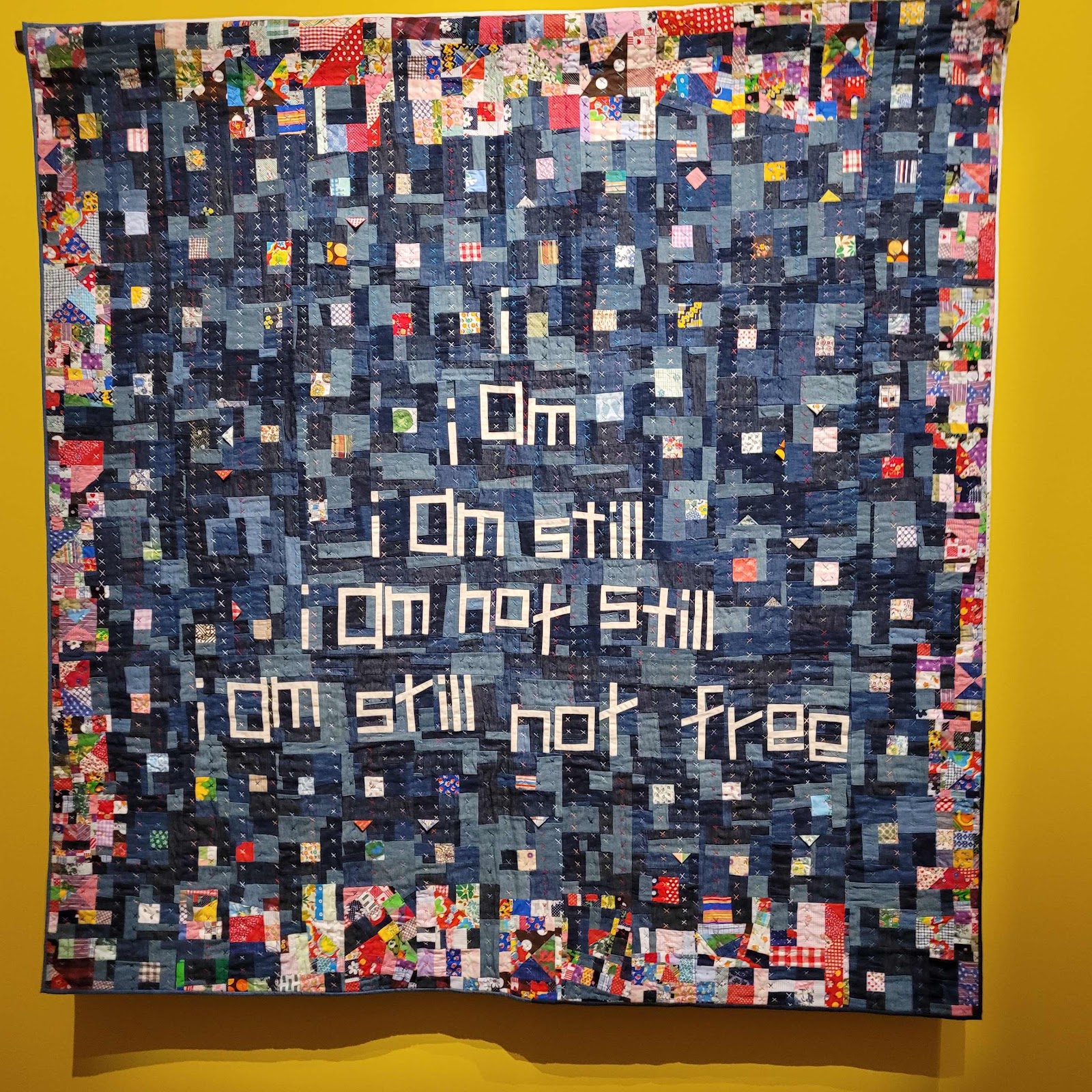 Chawne Kimber, “still not” . Both of these were displayed at the Renwick Museum in DC and thrilled me to view in person, having admired the artists and many of their works on Instagram and else where. 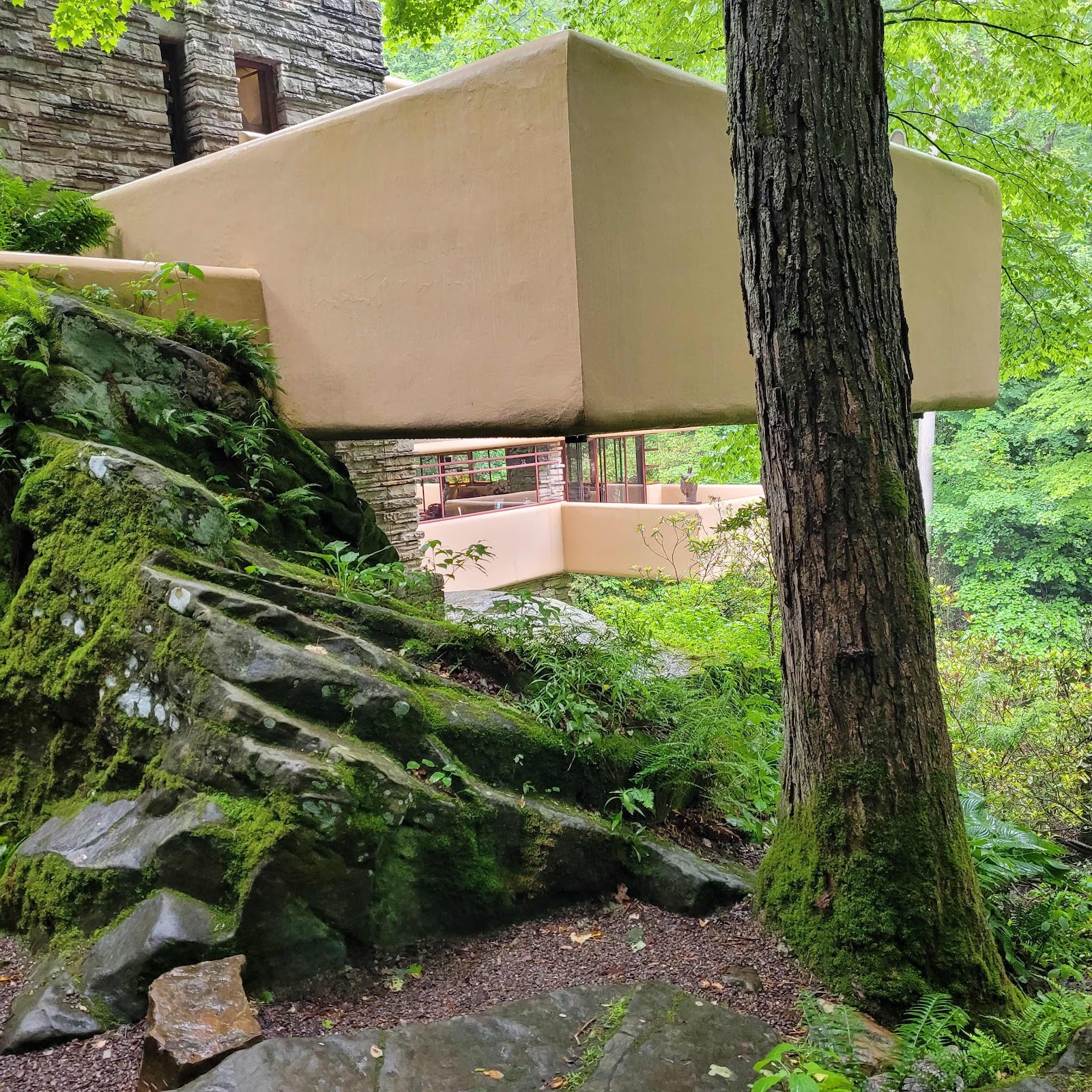 Falling Waters. The house was awesome but the biggest thrill was experiencing different geography after years of not leaving this Delaware flat farm and shore area. 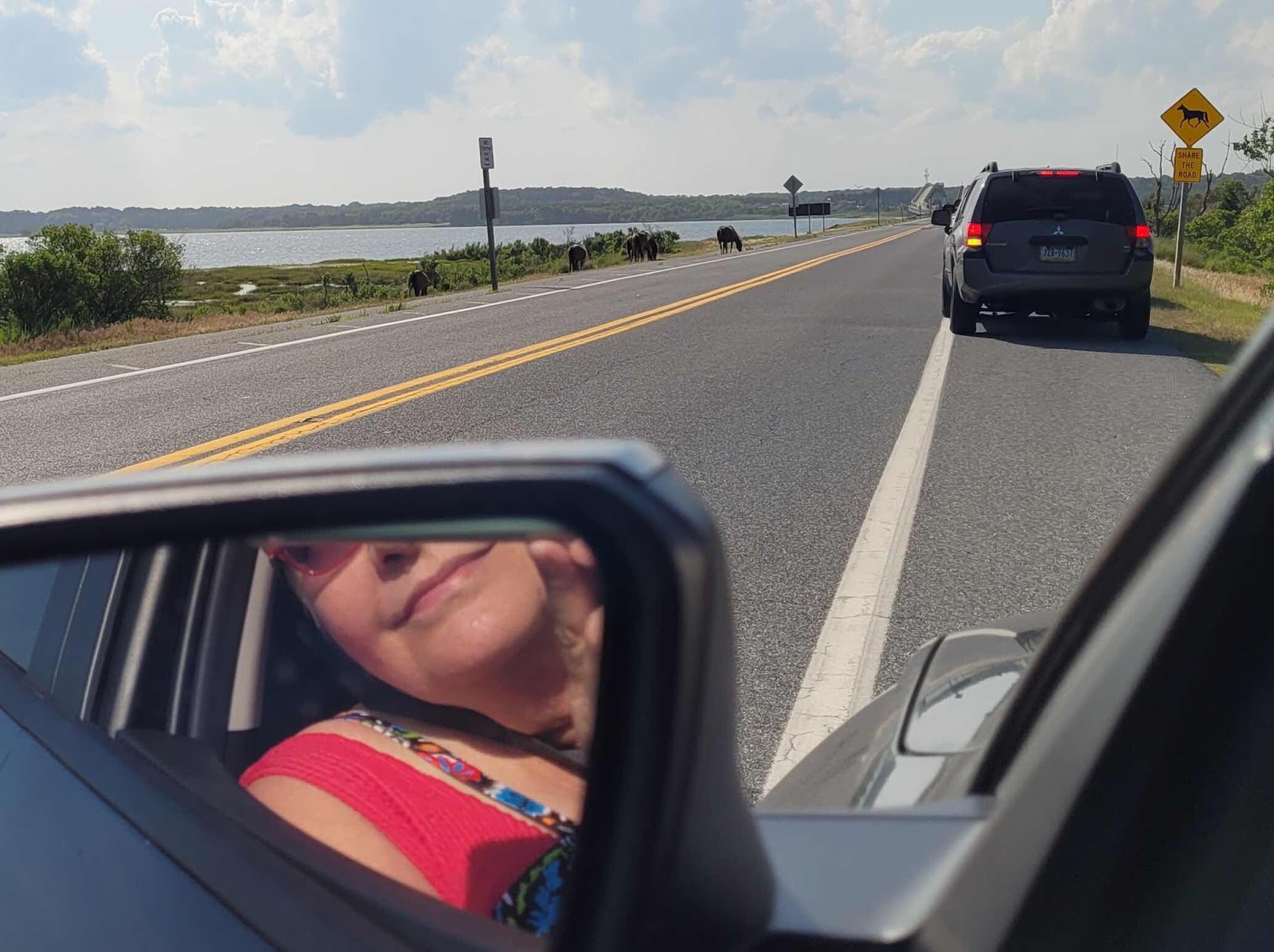 I made my first trip to Chincoteague so we could do a nice boat tour thing, but I couldn’t resist going to Assateague as well, the Maryland sister isle to Chincoteague and my personal favorite. The ponies mingle much more with people on Assateague at he state and federal park, and the beach is better as there’s ocean access, not just knee deep bay. I almost broke the legs of a misguided younger man that tried to save my floundering fat old self when I was trapped in the surf. I wasn’t drowning, just getting knocked down every time I tried to get up. Tried to tell him noooooo, but the next wave knocked me into his knees and took him down hard. Be careful trying to save folks in the ocean, it’s dangerous. We both made it out under our own volition though. All’s well.
I had to take the quilt still damp from being washed and line dried after getting the binding on the first morning of vacation! I’m going to miss it, I had it for at least three years while I worked on it bit by bit. Stalled and started. All those hand chosen fabrics. Not by any measure expert craftsmanship, not on the piecing or the quilting aspect, but dammit, lots of love. I believe it is well appreciated. 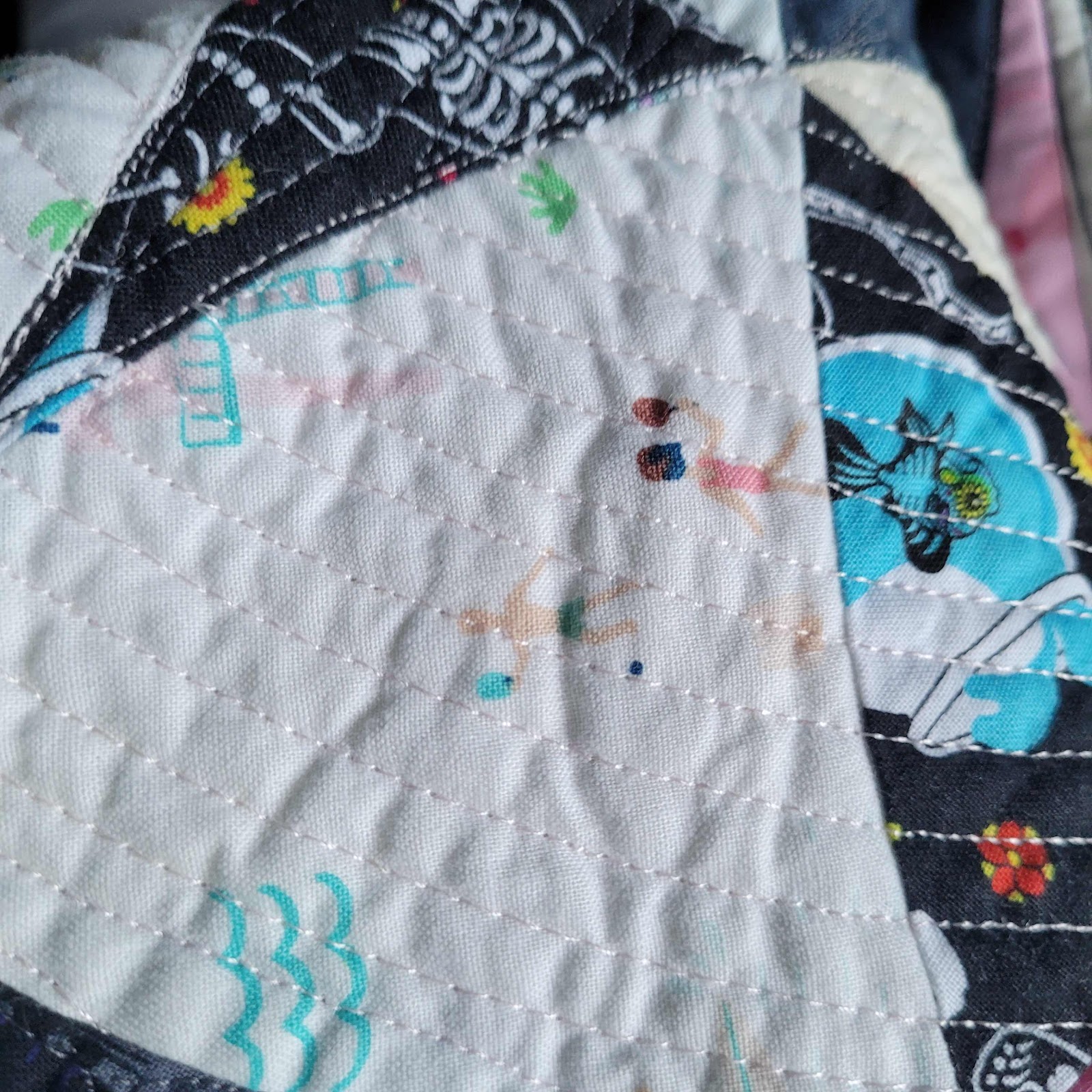 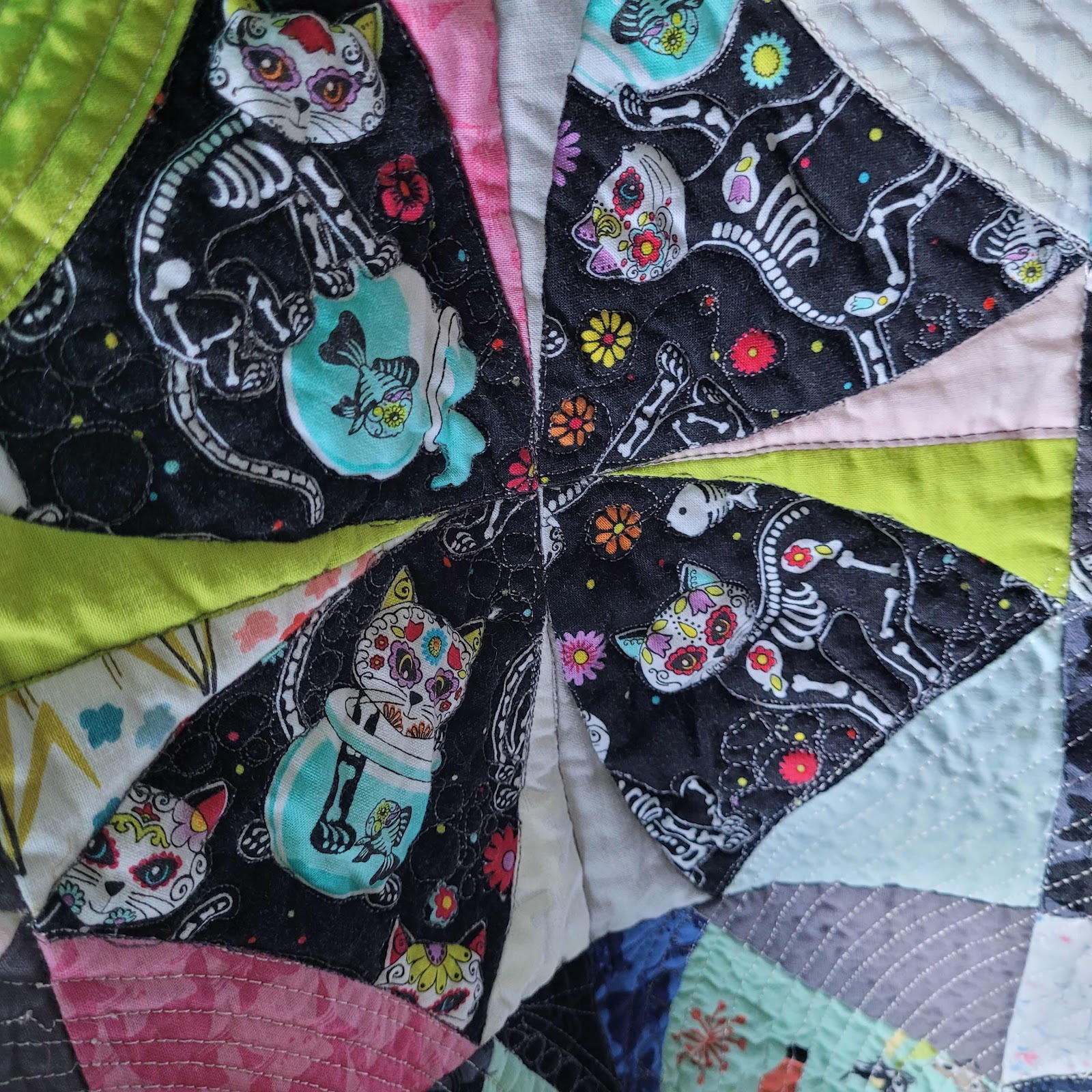 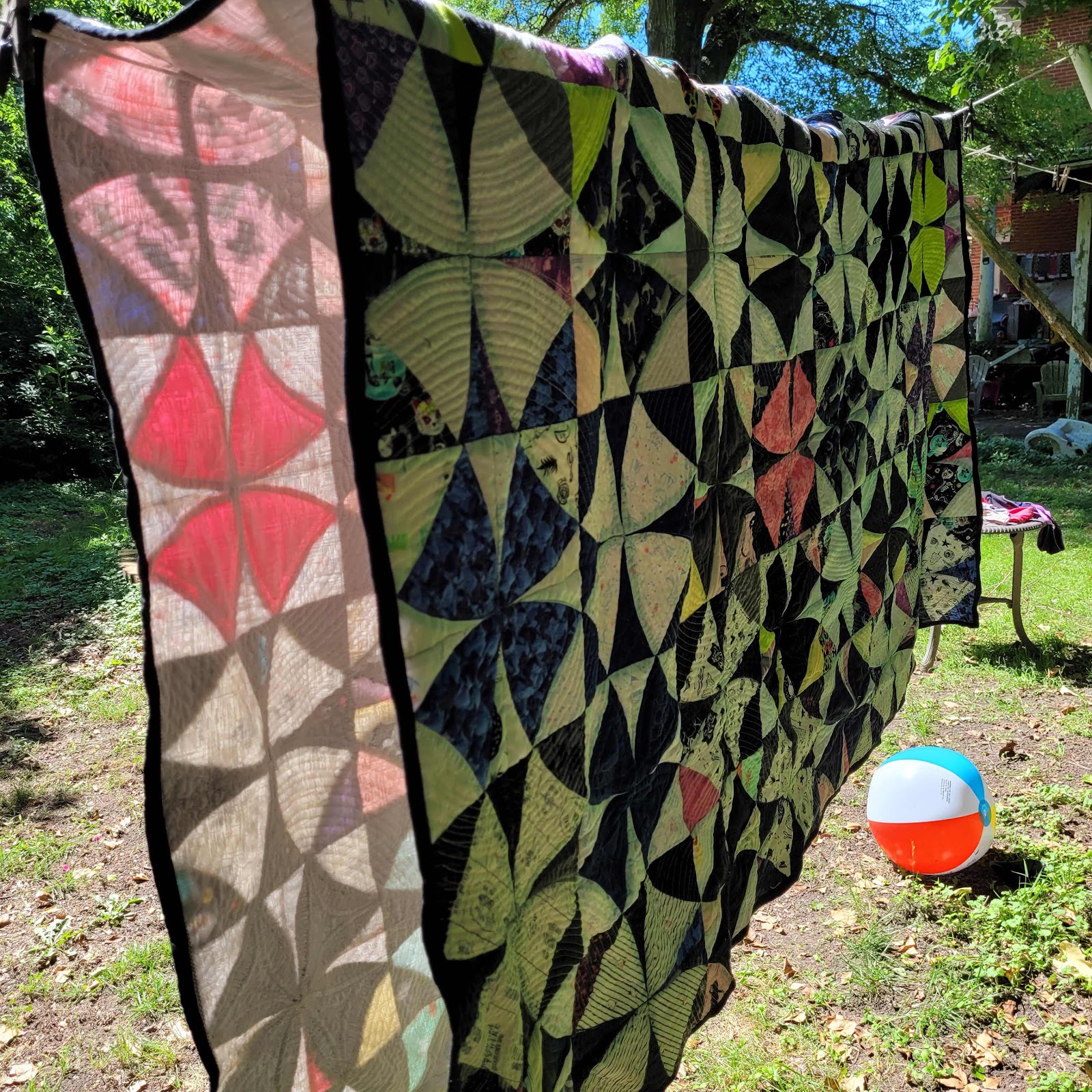 I’ve got other projects well under way, a baby quilt and a York pinafore, which I would have called a jumper growing up. I completed two bras and a pair of panties this spring too, badly needed, BUT! I started drinking nonstop, peeing like crazy and for the heck of it took a finger stick for glucose. I’m now a diabetic. I lost 16 pounds the first week with meds (mostly water weight) and then started keto for weight loss/glucose and insulin control. 3 months and I’m down 30 pounds which means undergarments are a new size, again. Thank God nursing scrubs can span a big range. I’ve still got several smaller sizes. But I expect to loose quite a bit more before I stop loosing weight so it’s going to be interesting. The good news is I’m almost back to the right size for my previously made bras.
After about 15 years in nursing, I started working in Dialysis and remember being blown away by what I learned then about high blood pressure, diabetes, and the kidneys. Now I’m at 30 and surprised AGAIN. I don’t recall learning about insulin resistance at anytime other than that’s how type two happens. But it was never treated as a primary disease of itself. Now I’m seeing that insulin resistance is a primary diagnosis that we should be trying to prevent and turn around. Except for acute kidney injury or chronic kidney disease, high blood sugar is almost always caused by insulin resistance. Type two diabetes, obesity (especially visceral fat), inflammatory diseases, even skin tags are all big indicators of insulin resistance. My skin tags are disappearing with diet modification, and my arthritis is GONE. I’m hoping for periodontal relief. Ok, health minute is over, but if you wonder about arthritis, polycystic ovary syndrome, stubborn weight gain, skin tags, eczema, etc etc, you can ask for a fasting insulin test, or a glycosylated hemoglobin that can stage you as “pre diabetic”. Lots of MDs won’t go for the insulin test and aren’t too fired up about insulin resistance, but it’s something you can help yourself with healthier eating (doesn’t have to be keto, which many doctors frown on). Really, health minute over.
Hoping that I’ll be doing much more sewing with my new energy and health!

Posted by BarbaraShowell at 5:24 AM