Wishing I could retire! I seriously need more leisure time! I have lost about 50 lbs on the keto diet and have just hit my first stall with the past few weeks. My skin is starting to flap like loose clothes, so a pause and slow down is ok. I am feeling much better, and I need a new wardrobe. The bras from spring are like parachutes. I did complete the York pinafore (will I get a photo? I don’t know.) and I really like the pattern for casual wear, those pockets! Its alter ego in pant form is up for sewing soon, the Yanta overalls. I keep feeling them in corduroy, but I don’t have any YET. Denims and twills, plenty. More fabric, sigh.
I’ve finished a baby quilt except for binding, a short detour. I’ve got an unending list of quilts to do in my head, and almost that much quilting fabric. Not quite. 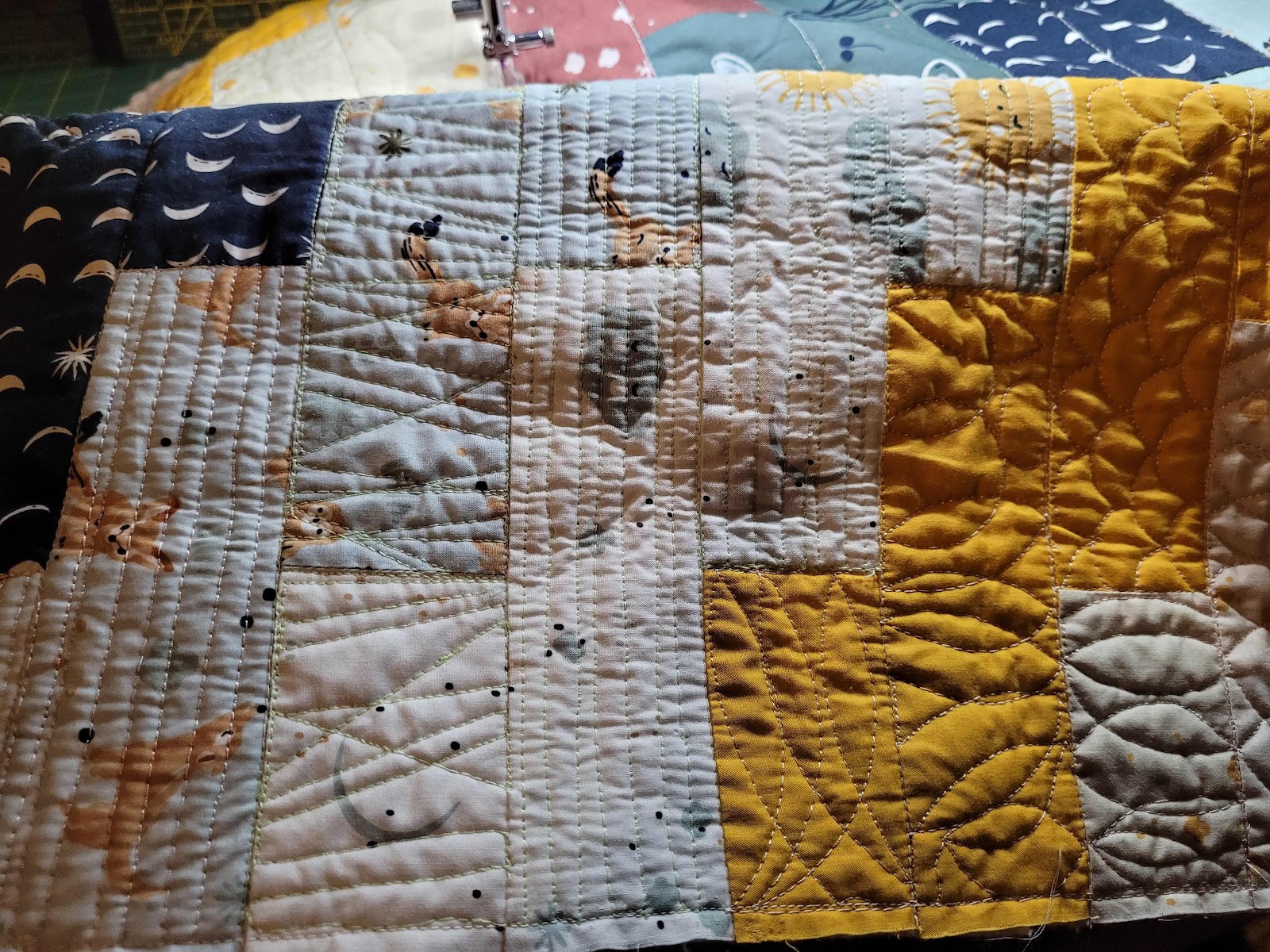 There’s some glow in the dark thread in the quilting here, for fun.
On night shift I’ve started some hand sewing, incredibly slow going for me. A benefit of the keto, my hands have been unable to do needle arts of any type for a while, but with the absence of all those carbs, I’m pretty pain free! I found the Ann Woods website with the most fabulous little hand sewing patterns for creatures and dolls and miniatures and I am slowly progressing with her mini dolls. I hope my skills rapidly improve! 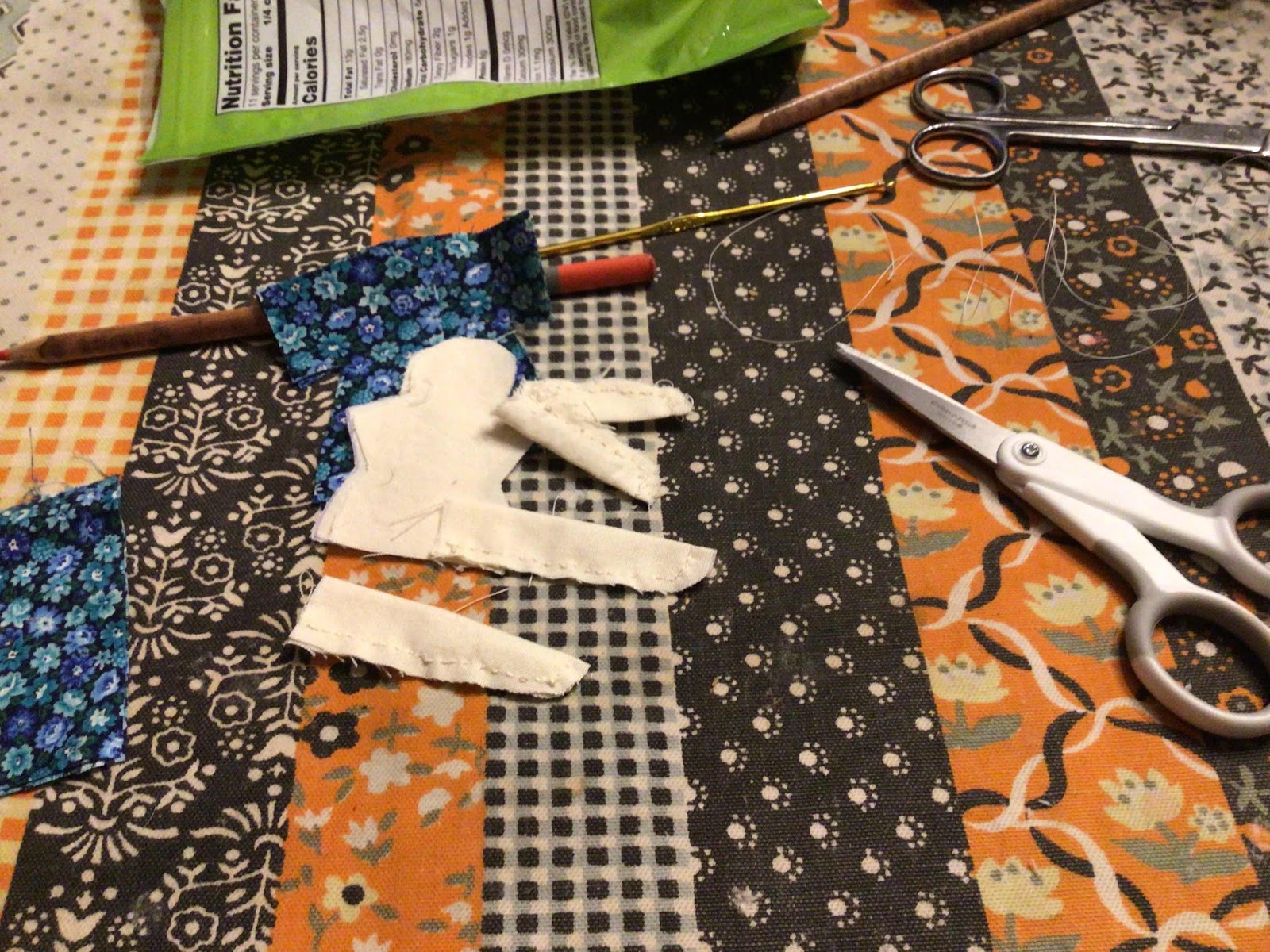 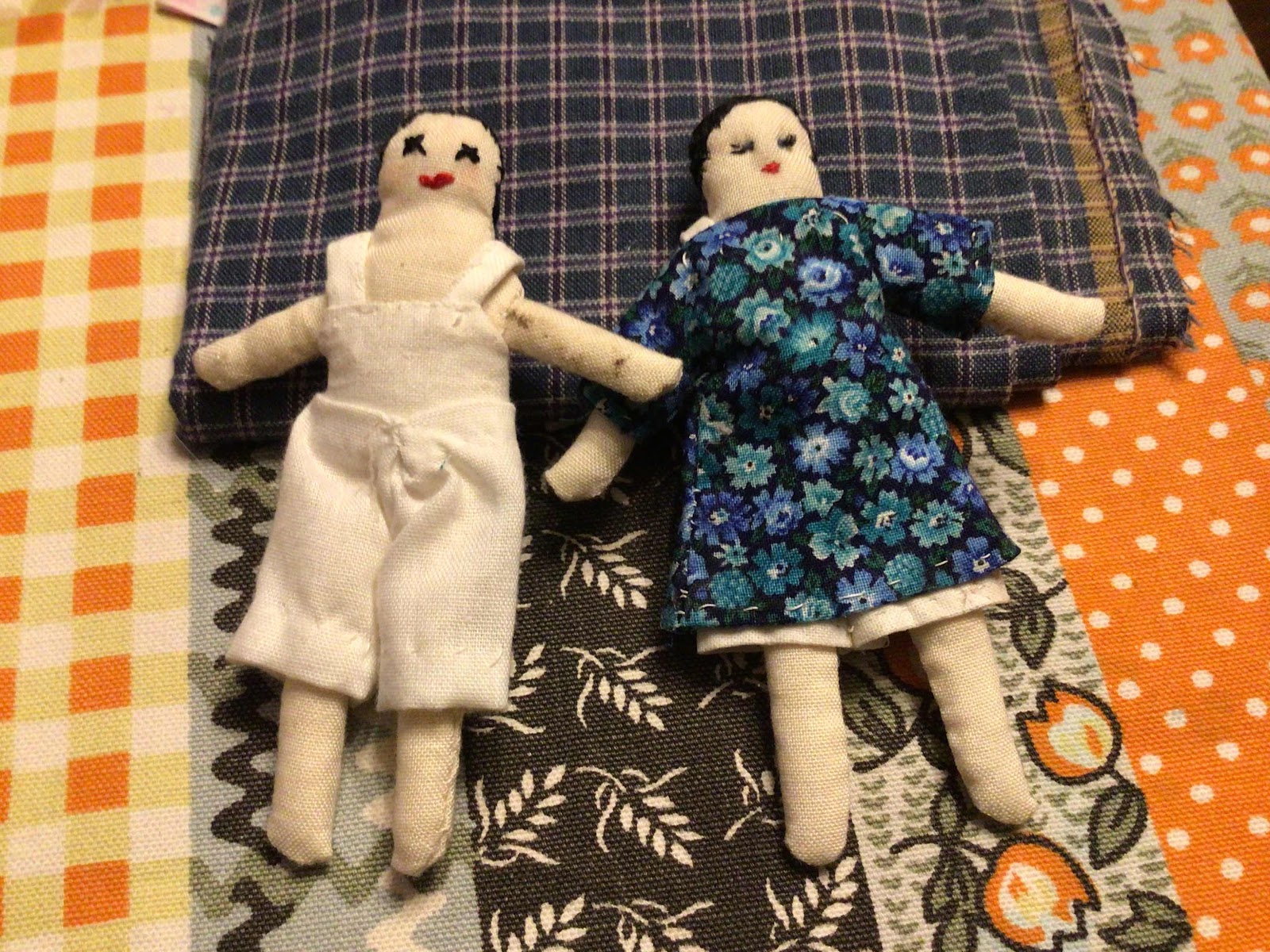 Thank you to https://canadianneedlenana.blogspot.com/ for showing me the way to Ann Wood’s website.
I’m starting the bra journey again. Of course I’m a completely different size than any I’ve sewed before, so I did all the measurements and wire tested to begin. I’m grateful I bought the entire size range of wires from bra builders some time ago, in case I wanted to sew for someone else as well as for my fluctuations. The wire I decided on was 3 sizes smaller than the last one I used! I don’t think that 52 worked as well as a 50 would have, but 48 is my best bet this time. I am using Porcelynne’s Eve bra pattern, my third time because I really like the fit. I wasn’t sure about the size this time, so I knocked out a test band pretty quick with some less special but still definitely bra fabrics. 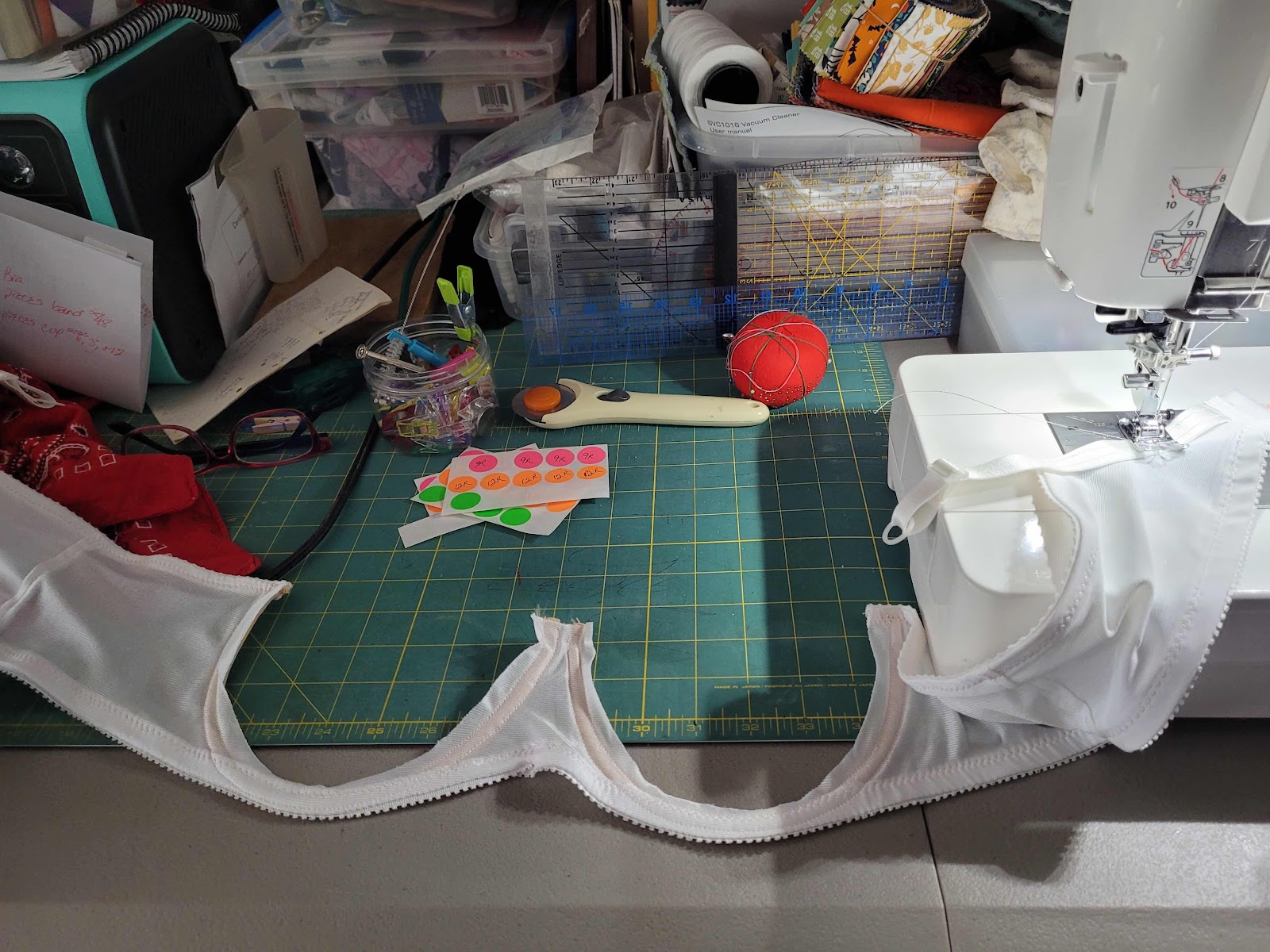 I left a little extra seam allowance to put in and possibly take out and replace bra cups. The band doesn’t need any changes, the first cup was so small I didn’t need to sew it in to know it was not going to fit. This bra isn’t sized in the same way as RTW bras and the designer sells her cups in a separate pattern from her band, allowing for a very accurate fit. So, getting   a great fitting band with wires off the bat was sweet, but only the start. Now it needs the correct cup with those wires to be complete, so I went up 2 sizes from the cup the measurements suggested. 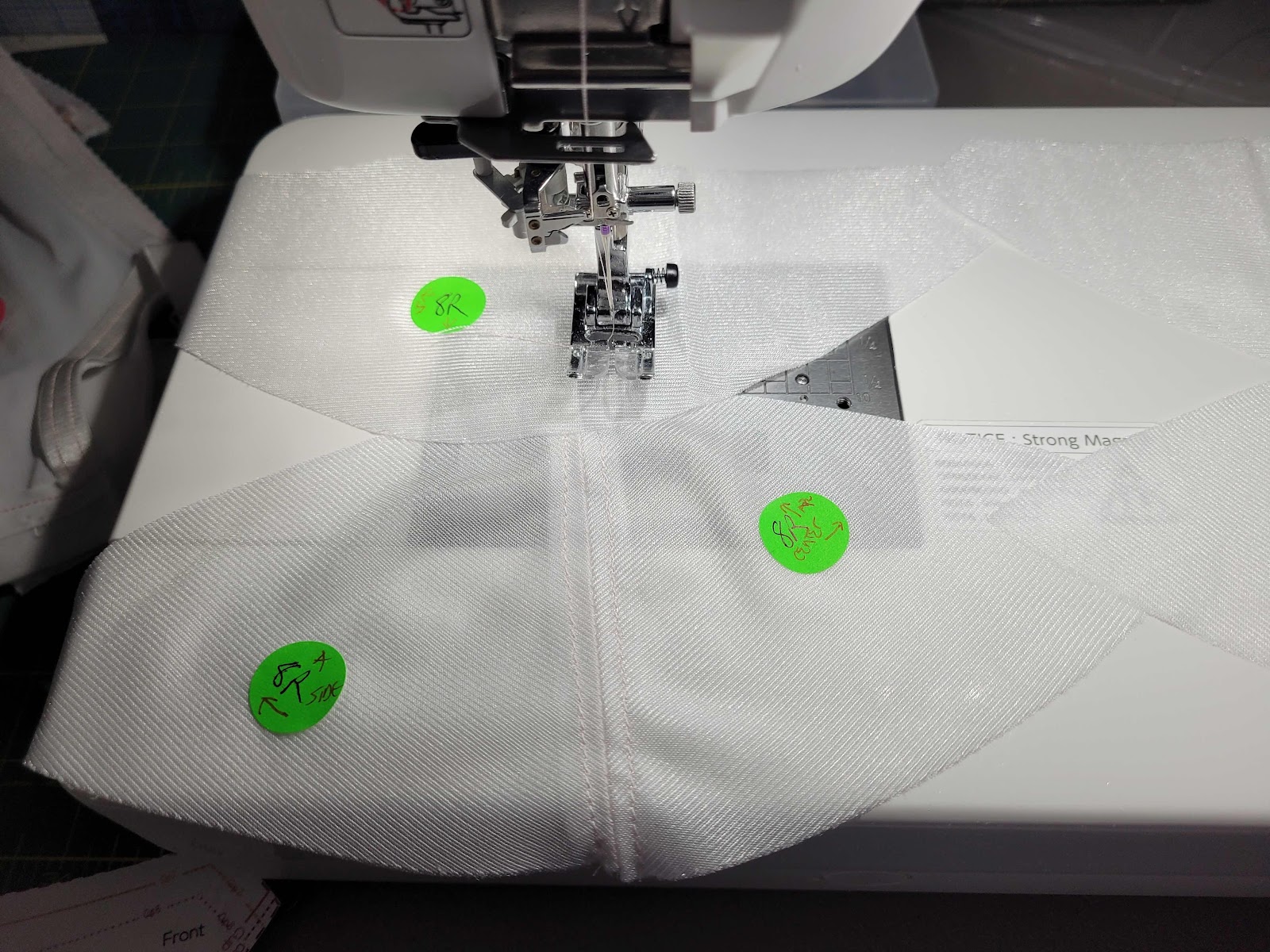 My tricot for this fitting bra is very tricky to identify right from wrong side, until all of a sudden you can see shiny on one piece next to a dull on the joined piece. I saw Beverly Johnson from Pin Up Girls patterns use this price sticker trick to keep track of right sides. Since the Eve bra doesn’t have notches and I’ve been known to get those center and side pieces swapped and upside down, I also note orientation on the sticker. It really really helps my sleep deprived brain get assembly correct. 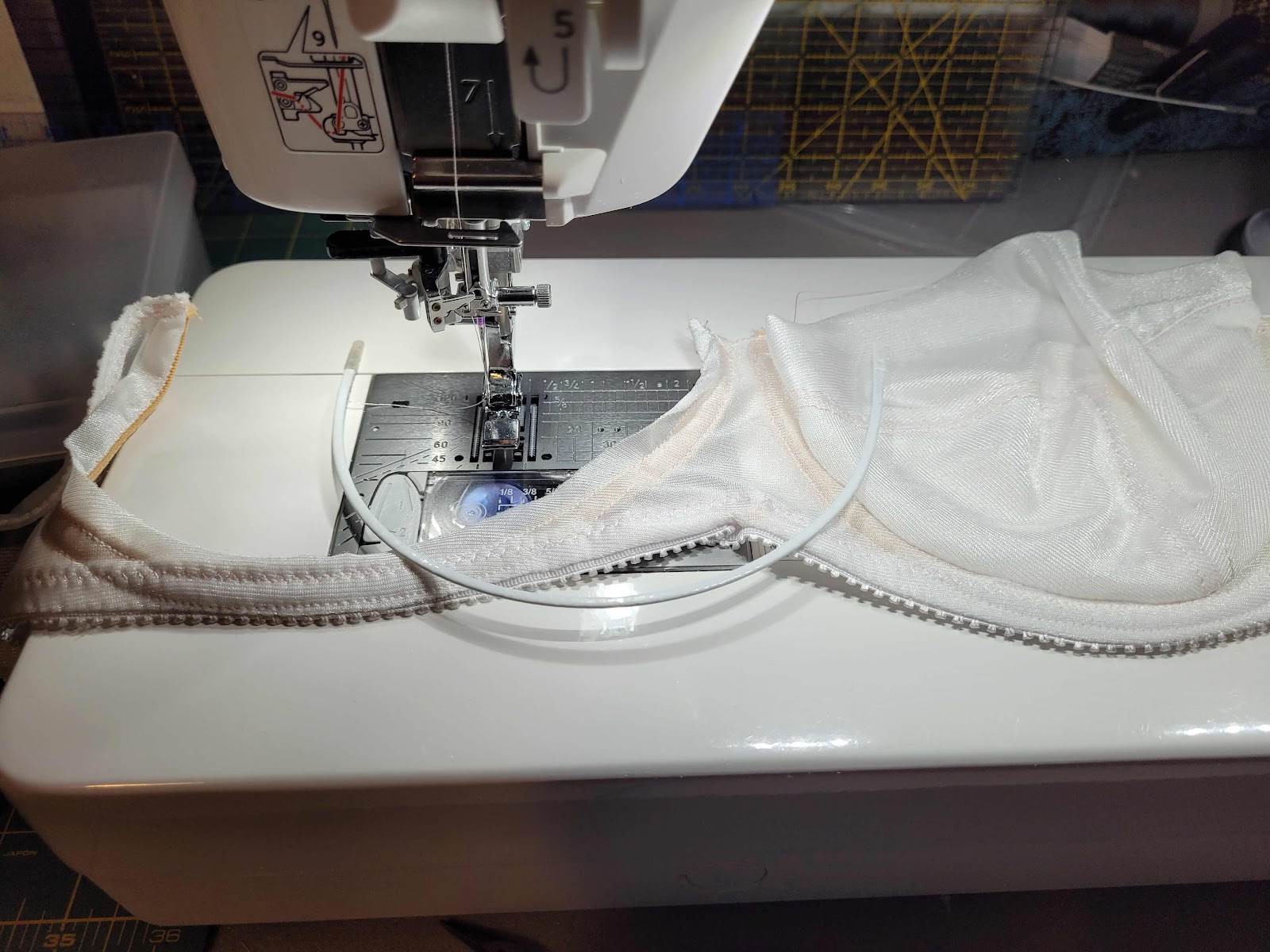 Note to self: if I’m ever inserting cups into a test bra band again, take the wires OUT before trying to sew the cups in. Took me several attempts and then seam ripping to figure that out. 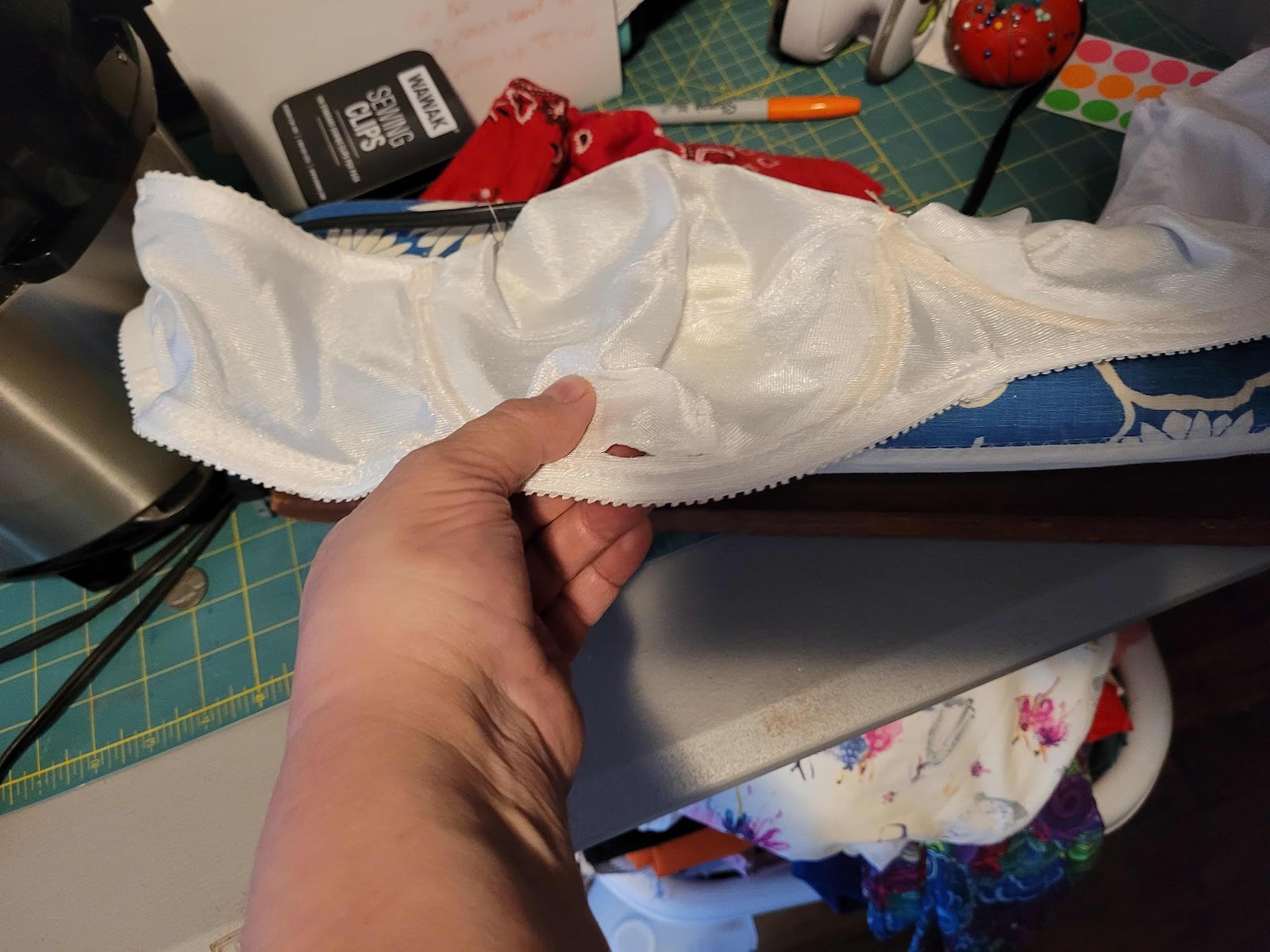 Even with the wires out it’s still a little tricky to get cups in around channeling, especially around the lower band elastic area. I usually put cups in the front band before either of those, but the test band is different. Even with the gape along the bottom of the wire band, it was adequate to be able to put on and judge, nope! So tonight I’ve cut out cups again, 2 sizes bigger. This might do it, or the next, or certainly not more than 4.  I WILL end up with a bra that won’t irritate and will give the best shaping to an older lady’s bosom. Actually, about three wired and one or two with just channeling, then some new sports bras, and an assortment of new underwear too. The underwear are MUCH easier to put together, though bras are a lot easier than you would think. You are only dealing with inches of seams and cutting after all.
I kind of hate to admit it, but that damn ocean liner Janome I bought is really nicer to sew on than some of my other beauties. Though I still love those iron workhorses.
Posted by BarbaraShowell at 10:58 AM